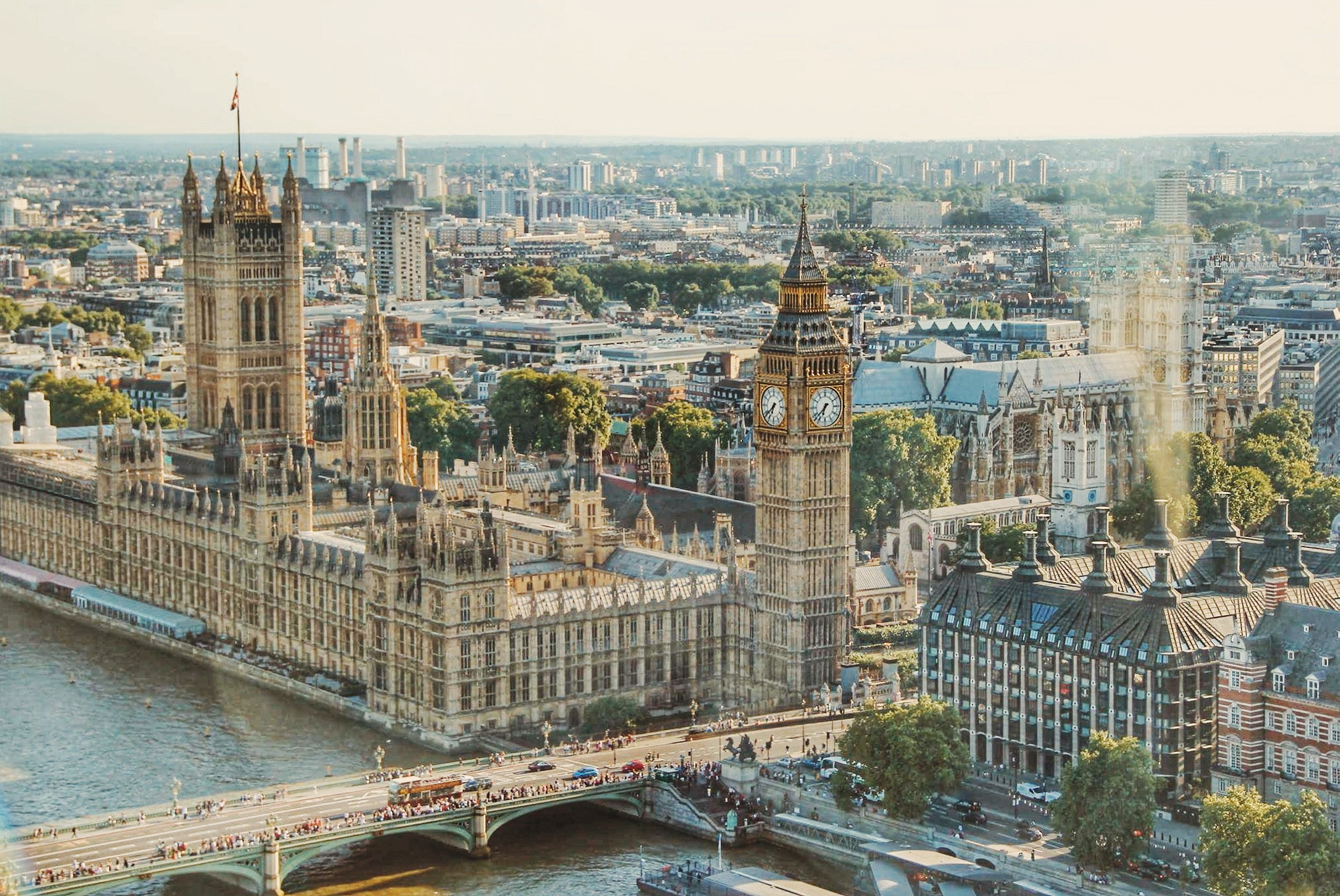 Recent fiscal policy has led to tremendous volatility in the UK government bond markets over the past week including significant stress placed on liability hedging pensions and asset managers.  We are pleased that in these unstable markets, for our clients’ assets, risk remains under control, liquidity remains ample, and the rising yield level has been beneficial for the funding level.  Unlike other UK pensions with high hedge ratios, we have managed to maintain our hedge levels and avoid any out-of-process rebalancing or disorderly liquidation of assets.

The Bank of England (BoE) seems to have restored an orderly bond market, for now, but we remain well positioned for additional volatility and have ample liquidity and contingency plans in place should the unprecedented volatility continue. The note below summarizes this truly historic market event.

On Friday 23 September 2022, Prime Minister Liz Truss announced sweeping tax cuts to boost the UK economy as the administration seeks to target 2.5% trend growth. As part of the “mini-budget”, Chancellor Kwarteng outlined the new measures including:

The large unfunded personal income tax cuts were more aggressive than investors anticipated with the biggest surprise coming from abolishing the 45% tax rate for the highest earners. Markets had a strong negative reaction to the announcements as investors tried to assess the impact of the UK government taking on a larger debt burden as interest rates rise. 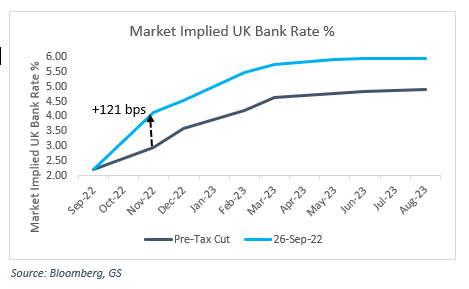 As yields increased, the currency depreciated to its lowest level since 1985. The sharp decline in the pound was analogous to emerging market behavior where investors typically become concerned with the government’s ability to repay its debt as rates rise. As illustrated below, the 2-year nominal yield rose 1% in 2 trading sessions from 22 September – 26 September 2022 while the exchange rate dropped 5.5%. In normal functioning markets, an increase in UK short-term rates would have strengthened the pound. 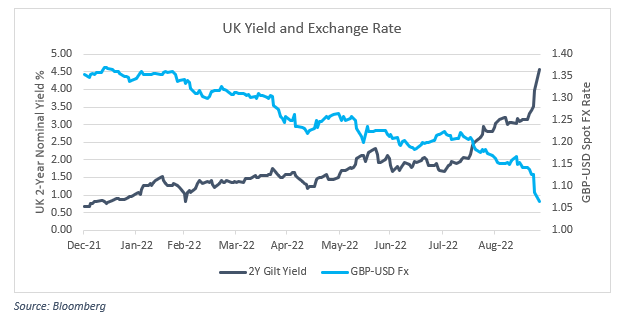 The 6-month rolling correlation between yields and exchange rates in the UK also turned negative –something that we also observed during stressful market events like Brexit and Covid-19.

The UK rates market has sold off meaningfully across the curve since the announcement, the largest move post-Brexit. Further exacerbating the recent move may be the perception that monetary policy is under-delivering market expectations. Last week the MPC voted to increase the bank rate by only 0.5% unlike other developed market central banks who hiked 0.75%. The hike was a bit smaller than the market expected causing the pound to retrace its gains against the dollar. Since the announcement of the tax cuts, the BoE has not indicated any plan to increase rates inter-meeting even though the market is calling for extra hikes. At the same time the BoE is reducing its balance sheet adding more supply to the market. The principal change thus far has come from real yields pricing higher. The real yield generally represents compensation for holding bonds and as inflation uncertainty and supply risks have increased in the UK, investors are demanding higher compensation. 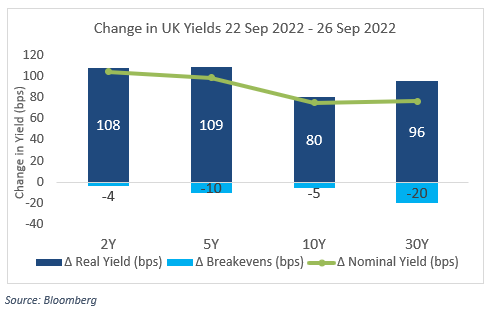 Our models estimate that the change since 22 September 2022 in UK rates represents approximately a 5 to 6-sigma move. In currencies the pound selling off was approximately a 6-sigma move also. Liquidity is extremely thin and trading costs today are up 5x from the normal 2 bps to 10 bps bid-ask spread for nominal bonds. A technical component driving the outsized moves may be the use of leverage in the bond market. Many UK pensions hedge a portion of their liabilities using repo and/or interest rate derivatives. With the sudden rise in interest rates, we expect the market value of the derivative positions to decrease sharply, leading to hefty margin calls on the positions. This may require pensions to sell more illiquid physical assets to meet margin calls, which in turn may further deteriorate liquidity like we witnessed in March of 2020 during the height of COVID-19. The ability to raise capital quickly or have reserve cash on hand is essential to navigate volatile markets.

On 28 September 2022 the BoE announced a dramatic plan to buy an unlimited quantity of long dated gilts to provide relief and potentially restore order to the market until at least 14 October 2022. They also delayed their quantitative tightening until 31 October 2022. There was serious concern from the BoE over pension funds being able to meet margin calls on their hedging strategies. This reversed much of the selling pressure from the previous 2 trading sessions with rates declining >100 bps in the long end as seen above.

A rising budget deficit should lead to higher borrowing requirements. Potentially more sustained inflation in an environment, where the UK will have negative short and medium–term real yields, should lead to a weaker pound. This, in turn, should translate to higher sovereign Credit Default Swap (CDS) spreads. As shown below, UK CDS spreads have widened out but not to extreme levels at this point which could mean that markets may normalize after the impact of the fiscal stimulus and/or monetary action from the BoE are better understood.

J.P. Morgan economists estimate that the impact of PM Truss’s fiscal package on near-term growth – that they expect to cost ~1.5% of GDP – is likely to be small. Their UK GDP forecast for 2023 was only raised from 0% to 0.3%[1].  A larger impact is possible once hard-to-measure confidence effects are factored in, but this is likely to be countered by additional BoE tightening. Large unfunded fiscal easing without independent review prompted an outsized sell-off in debt markets and a run on the currency since Friday 23 September 2022. Market nervousness will likely persist until the government provides a more sustainable longer-term fiscal plan.

Rachel Reeves, Labor’s Shadow Chancellor of the Exchequer, seems skeptical about the tax cuts being able to boost the economy[2]. She contends that trickle-down economics is no substitute for a growth plan. Ms. Reeves asserts that PM Truss’s plan seems to turn a blind eye to evidence and experience, the UK corporate tax levels are already below France and Germany, and they would have remained so at the planned 25% – yet UK corporate investment is still the lowest in the G7. She does not see any evidence that lowering the corporate tax rate to 19% will expand investment.

Ms. Reeves believes that to expand the supply side of the economy the UK needs to strengthen trading relationships, tackle long-standing weakness in the basic and vocational skills that hold back productivity, and help companies to start scaling up – including spinouts from world-class universities.

In an opinion piece in the Wall Street Journal, James Mackintosh highlights three major problems with UK’s new tax / stimulus plan[3]. First, unlike the early 1980s when Mrs. Thatcher introduced her reforms, British business isn’t currently being strangled by red tape, held ransom by powerful unions (a few critical industries excepted) or crippled by high corporate taxes. Second, the UK had debt of only ~40% of GDP and a small current account surplus in the early 1980s and there was considerable scope to borrow from abroad. Currently, the UK has a record current account deficit and a debt-to-GDP ratio greater than 100%, both of which the borrowing required to fund the new stimulus plan promises to exacerbate. Third, Mrs. Thatcher had a strong mandate to push through unpopular policies. allowing her to make big cuts in government spending to partially fund her tax cuts. This administration may not have that luxury, according to Mr. Mackintosh.

In the short-term we expect there to be continued higher volatility until the market resets to a higher level of interest rates after getting a clearer picture on the implications of the new policy. We would try to avoid selling existing bond positions at these levels since transactions costs are extraordinarily high and there is a chance of getting whipsawed as markets either normalize and/or react sharply to new policy announcements. Positioning portfolios to be able to raise cash quickly for margin payments may be crucial in managing short-term extreme volatility. SECOR’s collateral management process is driven by three mechanisms to ensure liquidity:

We believe the collateral management process should be considered strategically in conjunction with a pension plan’s liquidity and asset allocation. This process enables our clients to use derivatives to manage a portion of their hedging while maintaining sufficient capital during stressful market events.

Over time investors need to understand if the new fiscal policy can overcome the shortfall in tax revenue. If it cannot, then markets are probably correct about demanding extra compensation through higher yields. PM Truss’s “mini budget” is at best a well-intentioned plan for addressing the UK’s major structural problems of lagging investment and stagnating productivity growth. Unfortunately, the program is ill-timed and entails considerable risk. The announcement of the program — which did not include an accompanying fiscal anchor or official Office for Budget Responsibility (OBR) analysis – contributed to significant uncertainty and prompted major sell-offs in fixed income and FX markets. Shocking markets with major policy changes may lead to unintended volatility and dysfunction as we witnessed in the US during the Taper Tantrum of 2013. More concerning is the seeming disconnect between increasing fiscal stimulus, while the BoE is trying to tame double-digit inflation. This appears to be a highly risky strategy that is likely to maintain upward pressure on rates and could even result in a tail risk of loss in confidence in the central bank’s ability to keep long-run inflation expectations reasonably contained.

In the long run, nominal rates resetting higher is normally advantageous for pension schemes since the liability value is inversely related to the level of rates. We believe liability hedging is an essential tool when managing assets against a liability because hedging helps mitigate funded status volatility. If rates continue to rise and funded status improves, we think pensions may want to consider increasing hedging ratios and locking in their funded status. We estimate that in the recent moves, pension schemes may have seen their funding levels improve by approximately 5% – 15%. We believe that the BoE’s (necessary) response should provide temporary relief; however, printing money may introduce more inflationary pressure in the market. We could also see yields rise again as investors turn their attention back to the fiscal stimulus. Overall, we think the coming months could provide a good opportunity to purchase hedging assets as funded ratios generally increase with rising yields.

The aggressive tax plan from the new UK administration has led to extreme volatility in the rates and currency markets. The markets are now pricing in approximately a 6% terminal rate in the UK by Q2 2023 and given the increased risks, investors are demanding a higher yield for lending to the government. Overall, we expect the fiscal package to have only a small positive impact to GDP and to the extent that it raises bond yields, it should reduce defined benefit liabilities. We will continue to actively monitor the situation and work to mitigate risk. We will also continue to look for tactical opportunities that may arise in potentially dislocated markets.

[3] Mackintosh, J. (2022, September 23). ‘Markets Are Right to Be Shocked by Britain’s Version of Reaganomics’. The Wall Street Journal. 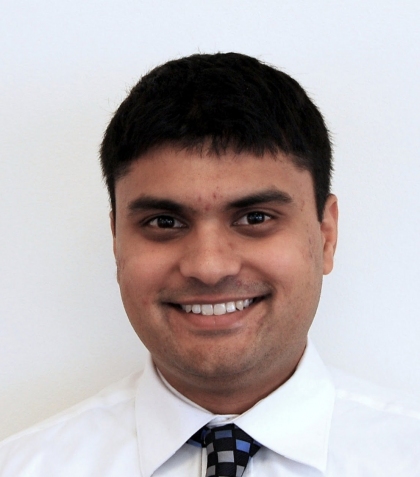 Parth is a portfolio manager at SECOR, responsible for managing various derivative overlay portfolios, hedging strategy design and portfolio construction for clients. He has over 10 years of investment management industry experience, including time at Citigroup. Parth holds a BS in Applied Economics and Management from Cornell University.