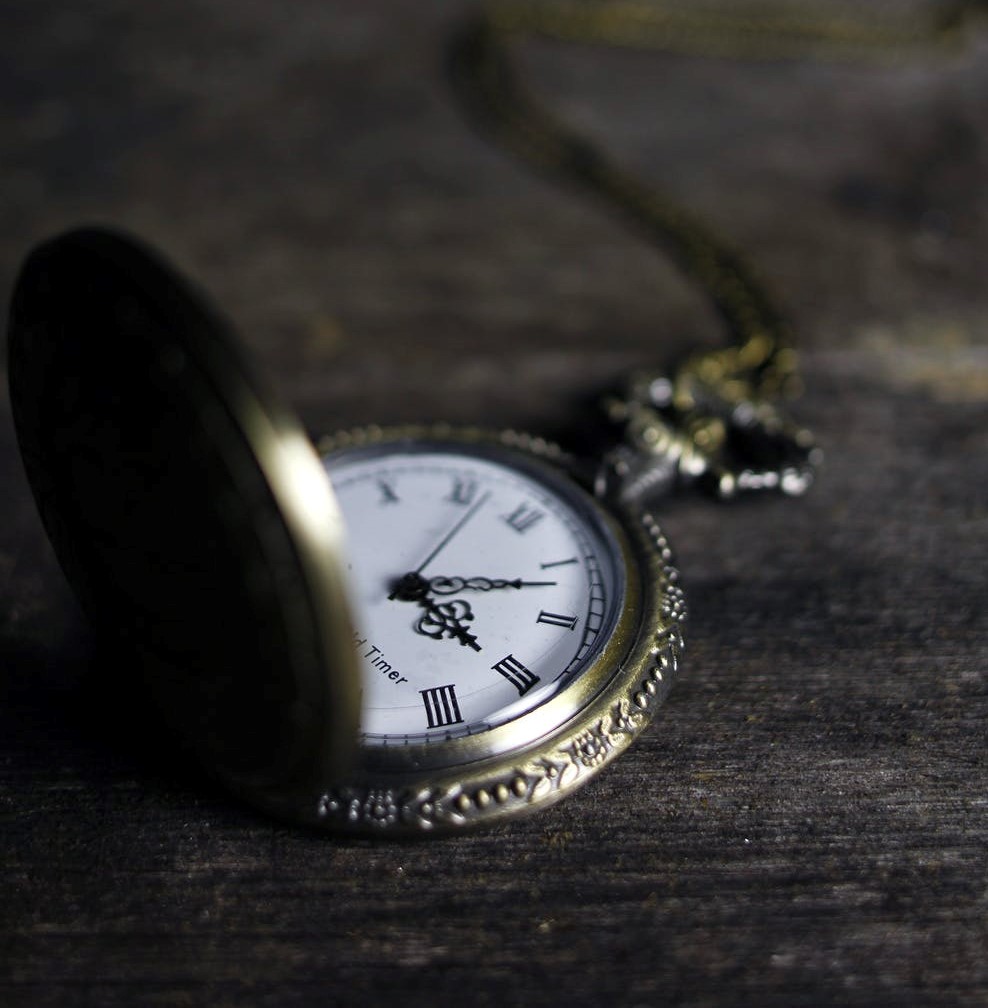 During these unprecedented times, the global pandemic has reinforced the importance of businesses pooling their assets and resources together to complement their strengths. Whilst the pandemic has had a negative impact on some sectors, others have benefited, such as e-commerce websites. As major economies attempt to get back to “normality”, and as vaccination efforts accelerate across the globe, some of these companies may look to expand their operations through mergers and acquisitions (M&A).

A common strategy deployed by hedge funds is to buy the shares of the company that is to be acquired and simultaneously short the acquirer’s stock, also known as merger arbitrage. The market-neutral profile of such a strategy drastically lowers its correlation with equity markets and makes it an attractive vehicle for diversifying a traditional equity-bond portfolio. But how can one assess the merger arbitrage environment and its attractiveness?

Three possible approaches to evaluating the attractiveness of merger arbitrage include:

1. Measure supply and demand and see which way it tilts

Over the first seven months of 2021, merger and acquisition volumes were at their highest levels ever, at $3.4 trillion. As seen in the chart below, this surpassed the previous year-to-date high in 2018 by 25%, with North America driving 65% of the overall global M&A activity. It should be noted, that in the month of July alone, 22% of the global M&A volumes are attributed to Special Purpose Acquisition Companies (SPACs). This implies the supply of capital hunting for mergers and acquisition targets has increased over the past year, translating to a potentially greater universe of deals to implement merger arbitrage strategies over the shorter term. 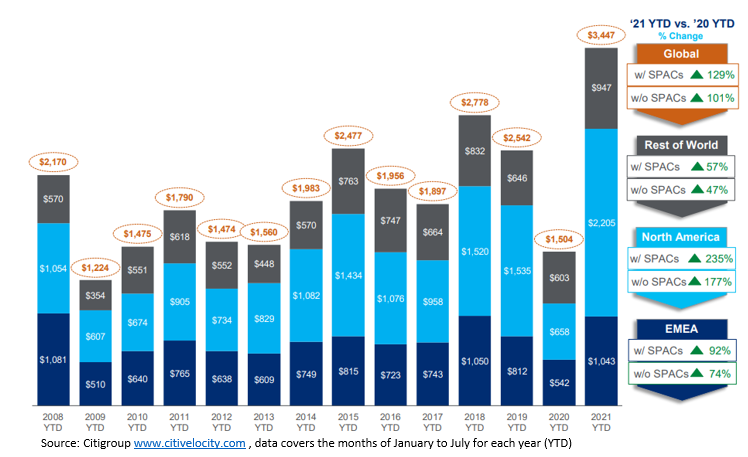 At a sector level, all sectors except Energy have recorded higher M&A deal volumes year-over-year. As seen below, Technology takes the lead, with nearly $1 trillion in volume and activity, up more than three times compared to the same period last year. Again, the increased number of M&A deals across various sectors could indicate more opportunity within the merger arbitrage space. 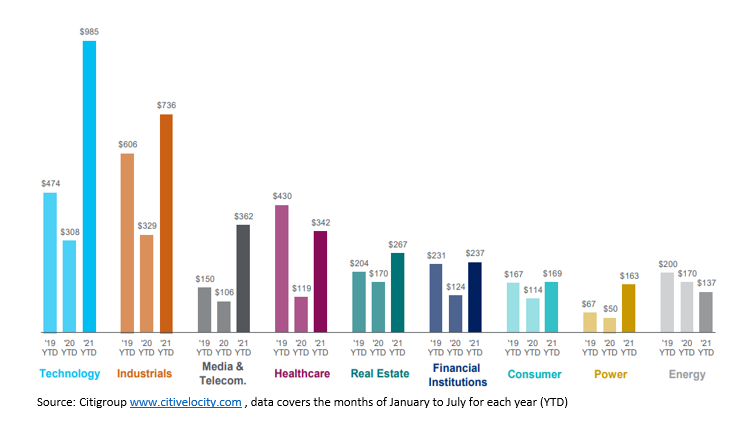 Merger spreads, that is the difference between the current stock price of the target company and the value offered by an acquirer, are currently showing mixed signals, reflecting risk and opportunity. As seen below, average annualized spreads over 2021 in the US have been somewhat average, around 6-8%, compared to historical spreads. 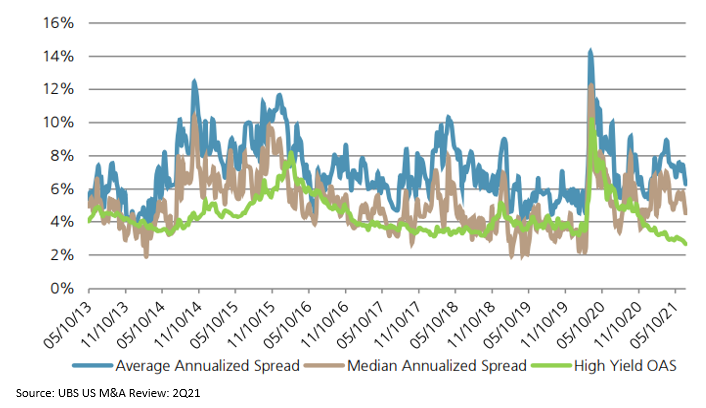 More recently, spreads have widened since Aon and Willis Tower Watson decided to terminate their proposed $30 billion combination last month after the U.S. Department of Justice (DoJ), filed a civil lawsuit to block the merger due to fears it would suppress competition. Although the widening of spreads could indicate higher levels of uncertainty, this could also point to better potential returns for merger arbitrage.

The riskiness of a merger and acquisition deal is subjective. One measure of deal complexity is the number of days to completion. Generally, the longer it takes to complete a deal, the higher the level of perceived risk. As illustrated below, the forecast average days remaining to completion has fallen over 2021, to an average level comparable to historical figures. However, this forecast could expand if deals were to encounter new hurdles/delays. 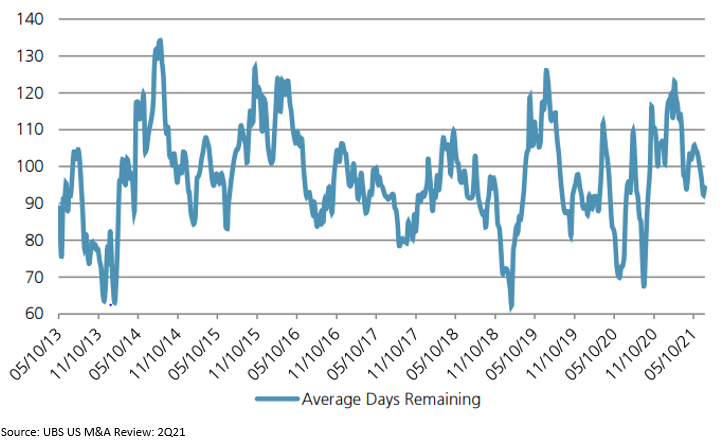 In summary, the three indicators of the current merger arbitrage environment provide mixed signals. M&A activity has increased over the past seven months, with a significant proportion attributable to SPACS. Spreads have recently widened, although this could be a short-term trend. Finally, days to completion is at an average level which could imply risk levels and corresponding rewards are fairly low. However, if we see spreads remain at current levels or even wider, this could indicate an attractive merger arbitrage environment over the next 6 to 12 months. 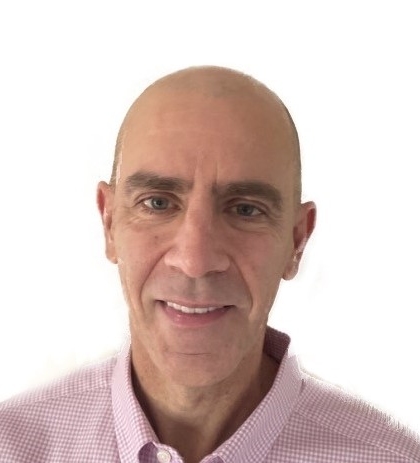 Philip is a portfolio manager in our hedge fund and alternative beta manager research team at SECOR, specializing in all aspects of hedge fund research. He has over 20 years of investment management industry experience, including time at Summit Private Investments, Oppenheimer & Co., FRM Americas, and General Motors Asset Management where he held a variety of hedge fund portfolio management and research roles. Philip holds a BA in Mathematics and Philosophy of Science from the University of Pennsylvania and an MA in Statistics from the University of California at Berkeley.