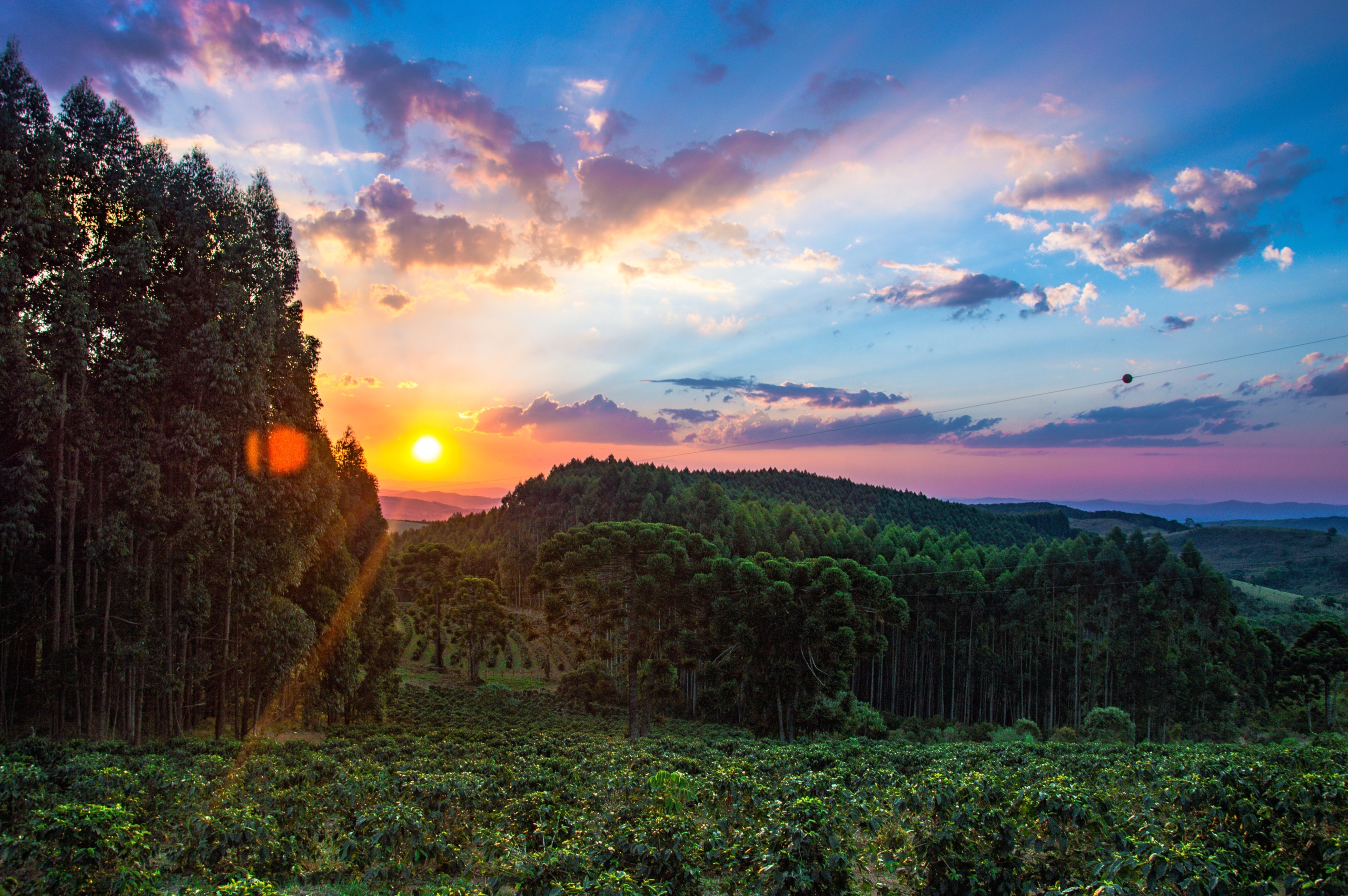 This three-part series provides an overview of the investment considerations for an allocation to Emerging Market Debt. The first section provides an overview of the Emerging Market Debt asset class, its investible sub-sectors, and their characteristics and return drivers. The second piece contains a discussion on implementation considerations for institutional investors. Finally, the third section discusses the current market backdrop and assesses the potential impact of varying macroeconomic environments on the different sub-sectors.

Emerging Market Debt (EMD) is a well-established asset class for institutional investors with an investible market capitalization over $5 trillion[1]. The potential benefits of investing in this asset class include a yield pick-up over developed market debt of comparable quality and duration and diversification benefits driven by relatively low correlations to most other global fixed income and equity markets. 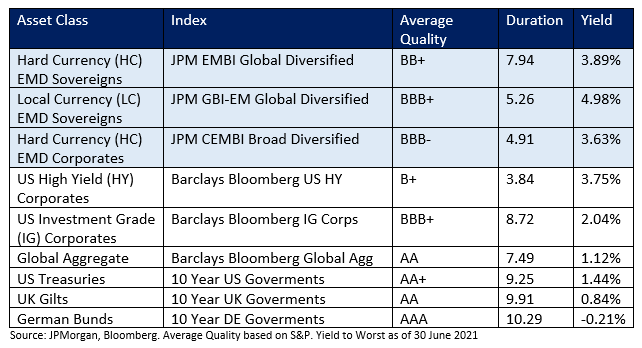 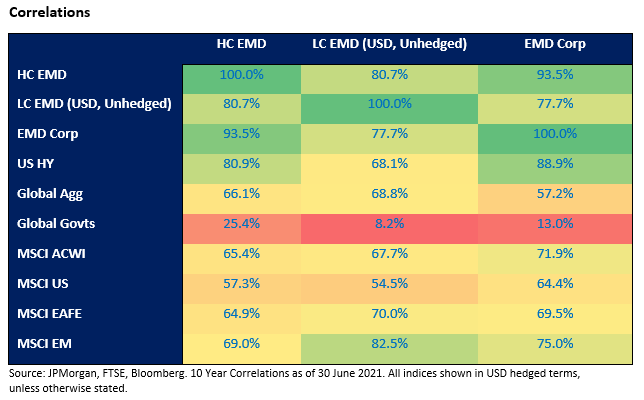 The table below outlines the key characteristics of the three aforementioned sub-sectors, as represented by the most commonly used benchmark indices for each. 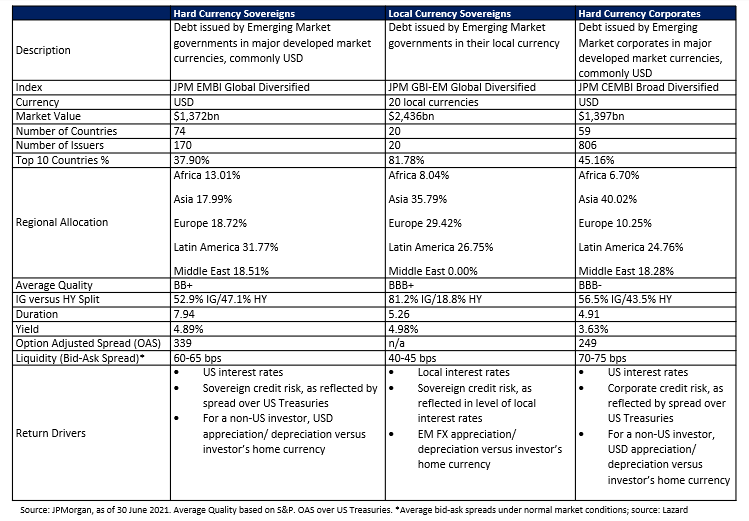 The characteristics detailed in the table above are based on the JPMorgan indices, which is the preferred benchmark for the majority of investment managers we follow. Other index providers, for example Bloomberg Barclays, may have slightly different inclusion rules and additional criteria (such as floors and caps for country weights), but all follow similar benchmark segmentation with regards to splitting the investible universe into Hard Currency Sovereigns, Local Currency Sovereigns, and Hard Currency Corporates.

The three sub-sectors differ on various metrics, which we discuss below.

Diversification: The Hard Currency EMD Sovereign index is well diversified by country and by region, with 74 countries well balanced across Africa, Asia, Europe, Latin America, and the Middle East, offering ample opportunities for alpha generation through country selection. The Hard Currency EMD Corporate index is similarly well diversified, with 59 countries and 806 issuers, although over 40% of regional exposure lies in China, and less than 10% in Africa. The Local Currency EMD Sovereign index is relatively less diversified, with only 20 issuers, and over 80% of the index in the top 10 countries.

Duration: The Hard Currency EMD Sovereign index has a duration of 7.94, significantly above that of the Local Currency Sovereign and Hard Currency Corporate indices, which have durations of 5.26 and 4.91, respectively. This high level of sensitivity to interest rates, exacerbated by historically tight spreads, could be a tailwind for performance if interest rates increase.

Liquidity: Hard Currency EMD Corporates are relatively less liquid, as reflected in higher average bid ask spreads of around 70-75 bps under normal market conditions and lower trading volumes, and thus more prone to liquidity events during broad market sell-offs – although notably they fared well during the pandemic-related downturn, as their strong fundamentals and local investor base placed them in good stead. Local Currency Sovereigns are the most liquid (bid ask spreads of around 40-45 bps), while Hard Currency Sovereigns sit in between (60-65 bps). For comparison, average US High Yield spreads are in the range of 50-75 bps, while US Investment Grade Credit has significantly lower bid-ask spreads (generally below 10 bps). Local Currency Sovereigns are more liquid than the Hard Currency sub-sectors due to the greater liquidity of currencies relative to bonds, the higher minimum issue size for the Local Currency index, and the higher quality of this index (with nearly all of the largest constituents being investment grade). Similar to most credit sectors, EMD liquidity deteriorated after the Global Financial Crisis, as broker dealers became less willing to hold positions on their balance sheets. Liquidity in EMD Sovereigns has remained relatively stable over the past decade, while EMD Corporates have seen some improvement as the sector as grown and matured.

The tables below show the historical returns, volatility, Sharpe ratio, and max drawdowns for the three sub-sectors. 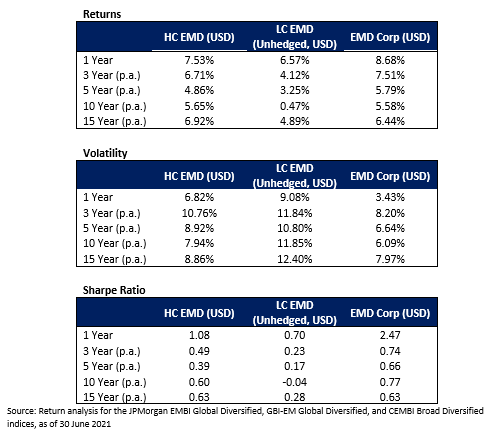 To provide a broader context, the chart below shows the 10-year annualized return and volatility of various asset class indices against the EMD sub-sectors. It is important to caveat that this is just a snapshot in time, covering a period which has seen strong performance of US assets in particular, and strong USD appreciation.

What drives the differences in return between the three sub-sectors?

Both the Hard and Local Currency Sovereign indices are exposed to the risk of default by Emerging Market governments, while the Hard Currency Corporate index is exposed to corporate credit risk – potentially leading to an overlap with an investor’s allocation to Investment Grade and High Yield Corporate debt elsewhere in their portfolio.

For Local Currency Sovereigns, a large element of return for a Developed Market investor can be explained by currency movements, which account for approximately two thirds of volatility. Currency movements are impacted by features of the global macro environment such as the US-EM growth differential. Historically, the higher volatility of the Local Currency Sovereign index (in USD terms), driven by the currency exposure, has resulted in lower Sharpe ratios than the two Hard Currency indices, as the additional risk has not been compensated by an increase in return, given the long period of USD strength relative to Emerging Market currencies.

Local Currency EMD has also typically been more exposed to global market sentiment than the Hard Currency indices, with foreign investors tending to withdraw during periods of worsening risk sentiment. However, the impact of foreign capital outflows driven by poor market sentiment has lessened more recently due to decreasing foreign participation (now less than 20% in aggregate). This is in contrast to the period leading up to the taper tantrum, which saw significant inflows into Local Currency EMD ahead of the sharp downturn.

The EMD sub-sectors have distinct characteristics and return drivers that we believe can fulfill different needs within an investor’s overall portfolio. While they share some similarities, the varied exposures and return drivers can result in performance diverging significantly under different market environments, and it therefore makes sense to consider the sub-sectors separately when incorporating EMD into your asset allocation. Part Two of this series will focus on implementation considerations for an investor looking to invest in EMD. Part Three will assess the impact of varying macroeconomic backdrops on the EMD sub-sectors.

[1] Based on the combined market capitalisation of the EMBI Global Diversified, GBI-EM Global Diversified, and CEMBI Broad Diversified indices, as of 30 June 2021. As of 31 December 2019, the total market cap of EMD was $29.9 trillion ($13.0 trillion Sovereigns and $16.6bn Corporates), but not all of this is investible for Developed Market Investors. The commonly used benchmark indices covered only 13% of this at year end 2019. [Source: Ashmore, BIS] 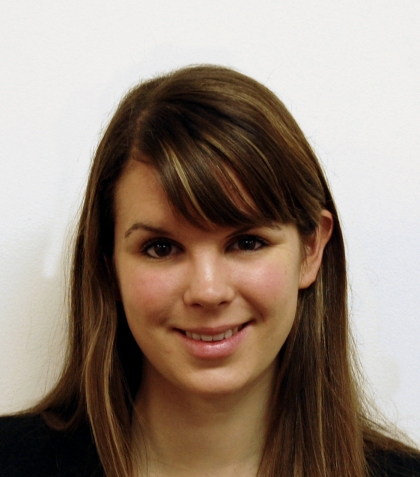 Anja is a portfolio manager on the advisory team at SECOR, supporting manager research across all asset classes with a focus on public and private credit. She has almost 10 years of investment management industry experience, including time at Schroders Investment Management. Anja holds a BSc in Natural Sciences from Durham University.