See what Bo Brownlee’s viewpoint is on growth stocks, and whether they really are that expensive

In Part 1 of this note a case was made that the current long Growth cycle in the US has in fact been warranted by the expanding spread in relative profit margins between Growth (Russell 1000 Growth Index) and Value (Russell 100 Value Index) stocks compensating for the coincident rise in relative valuations between the two styles.  In Part 2 we turn the spotlight on non-US markets, applying the same profitability-adjusted valuation framework to Growth and Value indices in Europe, Japan and Emerging Markets.

The situation outside of the US offers many parallels with that of the US.  Non-US Value stocks have also trailed their Growth counterparts, albeit by narrower amounts, but still enough to erase decades of Value premium.  Also, when viewed through the lens of relative valuations, there has been a multi-year widening in the relative valuations between Value and Growth stocks across all regions.  Value indices in the developed markets currently trade at similar discounts in terms of relative Price-to-Earnings (P/E) ratio to their Growth opposites at roughly one-half, while Value stocks in Emerging Markets currently stand apart for their more generous discount, as shown below. 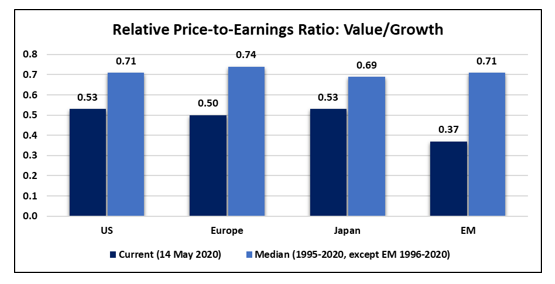 When we look at the relative profitability between Growth and Value stocks, a different picture emerges.  While the profit margin advantage for Growth stocks has also expanded in non-US markets, both developed and emerging, it has not been to the same extent as observed in the US.  The chart below compares the current profitability advantage of Growth stocks over Value stocks in comparison to long-term medians across the same regions. 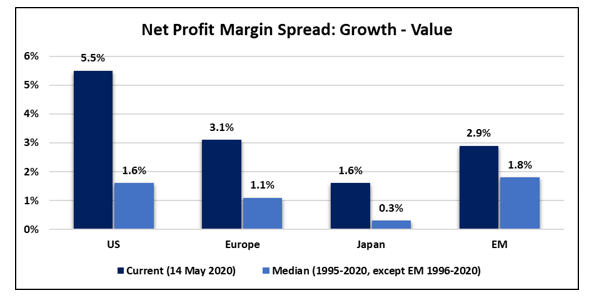 While profitability spreads outside of the US are all above their long-term medians, the magnitude of the gap with long-term levels pales in comparison to the US.  A key driver behind this disparity in profitability arises from differences in index compositions across regions.  The Growth universe in the US has come to be dominated by companies in Information Technology (IT) and related industries as a result of the success of their scalable, asset-light business models, epitomized by the superstar companies such as Microsoft, Apple, Amazon, Alphabet and Facebook.  This phenomenon runs deeper however than just these household names and includes a number of other less recognizable companies leveraging technology and contributing to that profitability advantage, albeit on a smaller scale.  IT stocks represent the largest sector in the Russell 1000 Growth index now, comprising close to 40 percent of its weight, in contrast to non-US markets where IT fails to register at top of the list of Growth indices and only in Emerging Markets does it command a weight that just touches 20 percent.  While the US experience has heretofore yet to be replicated, the Emerging Markets do offer some very interesting parallels.

Like the US, relative performance of Growth over Value in Emerging has been fueled by a few ultra-successful companies that have come to dominate the market capitalization weighted indices.  Together just four companies – Alibaba, Tencent, Taiwan Semiconductor and Samsung – comprise 21% of the broad MSCI EM index (and 36% of the MSCI EM Growth index), mirroring the concentration found in the US market where the five largest companies account for 20% of the weight of the broad S&P 500 index and 32% of the Russell 1000 Growth style index.  The rise of the Emerging Market index giants has been backed by superior profitability too; as a group, these four companies combine for a net profit margin of 23%, topping even their US counterparts’ enviable composite 19% margin.

The similarities end though in comparing the relative profitability of the multitude of companies that comprise the balance of their respective Growth indices.  Whereas the remainder of the US Growth companies still have a composite net profit margin of 8%, that number in Emerging Markets is a much less robust 3% – even less than the 7% net margin currently earned by Emerging Market Value stocks.

Returning to the framework of comparing the amount of profitability per P/E multiple point, Growth stocks in Emerging Markets today provide just 43 basis points (bps) of net profit margin per P/E point in aggregate despite the hyper-profitability of its largest companies.  This is much less than the long-term median of 66 bps and almost half that provided by Value stocks at 83bps (which is very close to its long-term median of 79 bps), shown below. 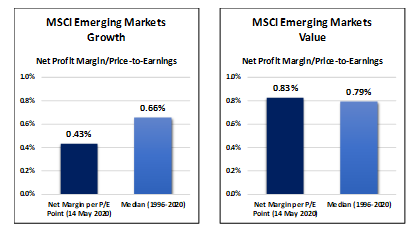 Despite the admirable fundamental performance of the four EM heavyweights, that alone is not enough to close the gap with Value stocks in this framework.  First, as noted earlier, Value stocks currently trade at a very large P/E discount to Growth – 63% today versus a median of 29% over the last 25 years – and second, the profitability advantage of Growth stocks in aggregate is insufficient to overcome such a wide valuation disparity.  If we were to assume no change in relative profit margins in Emerging Markets, we can solve for the relative return between the two styles that would bring their relative profitability per P/E point back to median levels; this calculation results in an implied Value stock outperformance of 37% over Growth.

There are several reasons to temper our enthusiasm for Value stocks in Emerging Markets, though, as these companies face many of the same headwinds as their Value brethren in the US.  One such handicap is the greater short-term vulnerability to the ravages of the Covid-19 induced economic downturn given the heavy cyclical exposure of the Value index.  This is especially pertinent to Emerging Markets which have typically displayed high sensitivity to changes in global economic activity.  Additionally, the low interest rate environment that has favored longer duration Growth stocks looks to remain with us for the foreseeable future if the response to the most recent crisis by central banks around the world is a guide.

The circumstances for non-US developed markets are less provocative.  Value stocks in Japan and Europe trade at similar discounts to Growth stocks (47% and 50%) as in the US (47%) but without the wide divergence in margins between styles.  Value stocks in Japan, with an extremely narrow deficit in profitability of just 1.3% to Growth stocks, provide the more attractive case for Value stocks.  As a result of this narrow spread in margins, Value stocks in Japan currently provide 38 bps of profit margin per P/E point while Growth provides just 27 bps.  Again, solving for the relative return that would bring the profitability per P/E point back to median levels for the two styles implies a 22% outperformance of Value versus Growth in Japan.

In Europe, a slightly wider profitability advantage for Growth stocks than in Japan all but eliminates any difference in expected performance between Value and Growth stocks.  This spread of 200 bps in margins results in similar levels of margin per P/E point between Growth and Value of 28bps and 35bps respectively, both very close to their long-term levels.  The resulting implied return is for a modest 4% outperformance by Value.  The table below summarizes the current net margin per P/E point across regions and styles compared with their long-term median levels and the implied return of Growth over Value for these to revert to median levels.

When we view relative valuation in the context of relative profitability, we have more reason to be skeptical of the long rally in Growth stocks outside of the US, particularly in Emerging Markets and Japan.  Unlike the US case where a seismic shift in profitability has underpinned the widening gap in valuations between Growth and Value stocks, similar or even wider valuation spreads have opened between Value and Growth stocks outside the US but have been accompanied by only modest changes in relative profitability.  Even in the Emerging Markets where we have witnessed the rise of a few index giants as per the US, their success has not seemed to spill over to the rest of their Growth index cohorts.  The result of these depressed valuations combined with a narrower gap in underlying fundamentals should mean a clearer path for Value stocks to reclaim the upper hand outside the US. 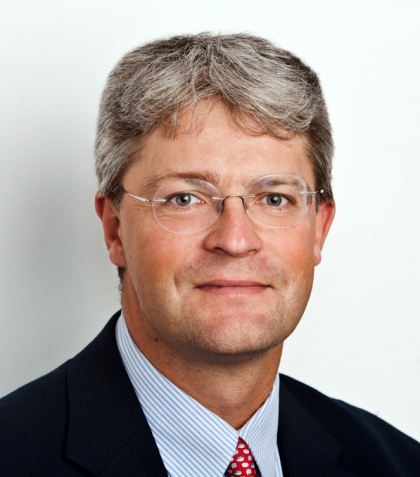